Memories and reflections from nine days of adventure. 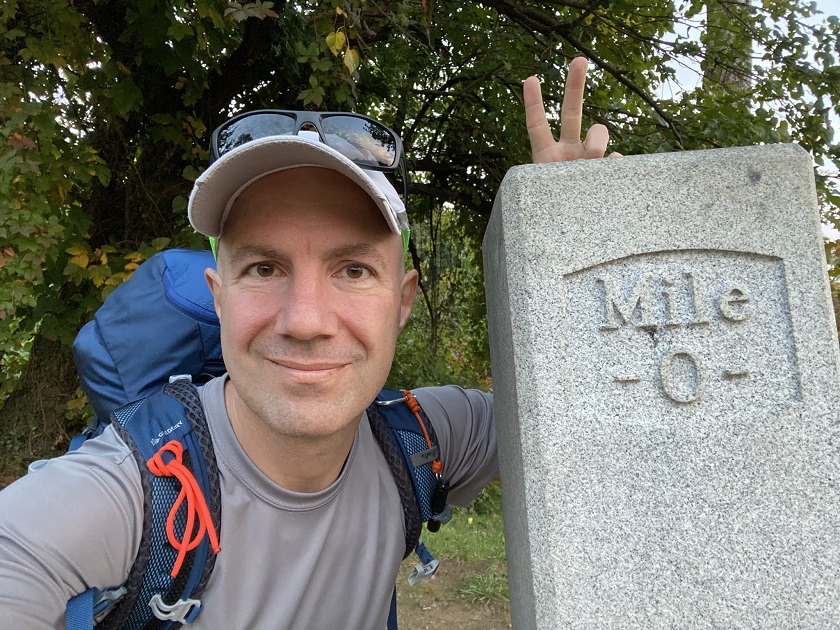 The Chesapeake and Ohio Canal extends 184.5 miles along the Potomac river from Georgetown in Washington, DC to Cumberland, Maryland. The brainchild of our nation’s founding father, the canal was seen as vital to connecting our fledgling country’s eastern region to its future breadbasket – the Ohio river valley.

I’ve seen many parts over the years. My goal this year: see it all.

A canal system requires water. Lots of it. Reliably. In order to meet that need, a number of dams were created to feed river water into the canal system. These dams create a slack water, areas above the dam where river water pools. A dam tames the temperamental Potomac into a large placid expanse that resembles a lake more than a river.

Dam four (mile marker 84.4) creates the 13-mile Big Slackwater. This dam allowed for the watering of the canal, and the slack water allowed canal engineers avoid blasting through limestone cliffs. Here the Slackwater served as the canal; only a narrow path was needed for the boat-towing mules.

The late-October morning sun highlights the lingering greens, and fires the reds, yellows and tans. The sky is deep blue. Overhead flies an American bald eagle, distinctive, even at altitude, by his white head and generous wingspan.

He’s hunting. He begins a slow descent, clearing the tree line and approaching the water. The water rushes beneath him at impossible speed; he is a born predator. His talons come forward. Plunk! They plunge into the water and emerge with a fish that would make an angler green with envy.  A few beats of his wings and he’s on the rise, exiting the scene over the trees above me.

The full length of the canal was in operation from 1850 to 1924 and provided quick access for industries in Maryland and Virginian to the bustling capital.  Boats could travel back-and-forth from Cumberland to DC, and guard and inlet locks allowed boats in or out of the canal to serve businesses and communities on the Virginia side of the Potomac. Some businesses relied on the canal to provide transportation, others relied on the canal’s reliable water to power factories. Scattered along the canal are remains of some of these businesses.

The Round Top Cement Mill (mile marker 127.4) began its nearly 70 years of operations in 1838 to take advantage of significant deposits of lime in the vicinity. The mill included kilns that, at the height of operation, produced 48 tons of burnt lime per day. Round Top cement was used in the construction of the Washington Monument and the U.S. Capitol. The canal provided transportation.

While much of the canal is now dewatered and barely distinguishable from the forests through which it was carved, seeing the remains of the industries that thrived during its operation illustrate that at one time, the canal was a bustling thoroughfare. As many as 400 boats were working on the canal, making the 4-to 5 day trip from Cumberland to DC. At its peak of operation in the 1870s, over 3,000 mules were working on the canal.

I pulled into Edwards Ferry (mile marker 30.8) for a short break near the end of day two. I took a few minutes to do my daily meditation while resting the dogs. Opening my eyes, I saw a biker had pulled over and was reading signage near me.

Now I am normally reluctant to don’t talk to strangers; I’m neither outgoing, nor a conversationalist. Small talk is torture. But I’m not happy with this state of affairs, and I try (rarely) to get out of my comfort zone and engage with strangers. So I struck up a conversation with Hanz from Denmark.

I joked that he didn’t have to travel 3,500 miles to see our decrepit canal! That was about the extent of the small-talk I was comfortable with, so I pivoted, employing a learning from Carnegie: people love to hear the sound of their own voice. I asked Hanz, “What brings you  to the U.S.?” Hanz had no problem grabbing that baton.

Hanz is visiting friends. He was a school teacher. On Mondays he tutors two Ukrainian refugees. He lives on a rural farm with chickens, ducks, and an apple orchard. He has 15 hectacres that he mows by hand. He has two children, grown.

Hanz paused looking down toward the river. His eyes defocused. Down the boat ramp the river slowly swept seconds into minutes. I had nothing, so I remained silent. After what felt like an eternity Hanz started again. His voice quieter, accent thicker. I listened with rapt attention.

He had retired last year. He’d worked the farm his entire life. His children were drawn to the city and neither wanted the rural life. He didn’t know what he was going to do. He didn’t know how much longer he could manage the farm. City life was antithetical to the big skies and open spaces that defined him. Eventually he’d have to move. It was clear he faced this decision with a sense of doom.

We only spoke for about ten minutes, but that conversation was the subject of hours of reflection over the remainder of my journey… I’m 52 now – and I am, with increasing frequency and intensity, realizing that the road behind me is longer than the road ahead…

Recognizing my internal emotional state is not a strength area for me. It’s not a skill I developed, nor have sought to develop. I often joke that my emotional pendulum swings between happy and angry, with occasional bouts of ecstasy or rage. But after several days of the journey, I came to realize a sense of contentedness that I rarely feel during the hectic day-to-day.

I remember when I first sensed this feeling. It was morning and I had just gotten onto the trail for the day. I’d changed out of my sleeping clothes, gotten dressed, packed up my mattress, quilt, food and tent; had made coffee, shouldered my pack, and was happily consuming a hot breakfast as I started down the tow path.

Everything I needed was with me. My mission was clear, and simple. The routine was not complicated, and every action had significance. There was no clutter in my days, no ’emergent issues’ to deal with; no stress about messy kid bedrooms, unreturned phone calls, or unfinished projects; no laying in bed wondering what unexpected stressors tomorrow might bring. My days were simple and fulfilling.

That wore off quickly as I entered Cumberland. While making my way to the hotel, I was negotiating busy streets, navigating the town using GPS, and beginning to think of “all the stuff I had to do.” It was an unwelcome context change. How do I retain that sense of simplicity, of clarity of mission, of satisfaction? Is it decluttering mentally and physically? Is it focusing more on the moment? Is it changing negative or limiting mental models – my number one being, “if it can’t be perfect, screw it,” and my number two being, “it would be easier if I just did it myself.”

And how can I help my kids with these realizations? They are too young to be able to appreciate the satisfaction of simplicity; yet, they are being raised in an environment is overloaded and overstimulated. They are not being taught the value of a calm, clear mind, or the satisfaction of a peaceful, contented spirit. How do I give them the tools needed to navigate a world that seems engineered to distract attention and consume spirit?

I don’t really know the right answers, but I want to find out!

I had a great time on this nine day adventure. I would certainly do it again. Not alone. This is an adventure worth sharing. On foot or on bike – I certainly recommend a visit to the Canal.